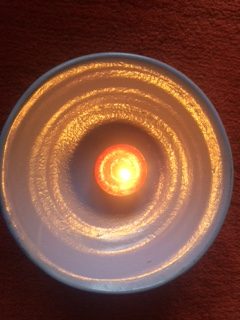 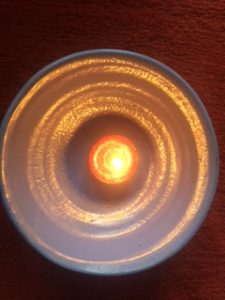 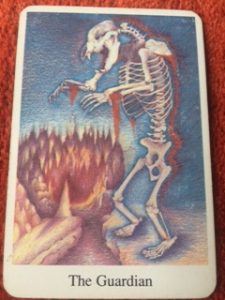 In the story of Brigit the Spear which Midyar wields represents Will and preparing the ground. The Cauldron of Plenty is about asking for what we need (and expecting it to arrive).
Next the God, Mananaun, takes the Sword of Light and defends the new made world against the encroaching monsters.
What are monsters? It’s the old story that tells us that some creatures are monstrous, while others are loveable. In an earth based mythology, all life is sacred. The monsters represent troubled parts of ourselves. Today’s image shows a representation of ‘The Devil’ card from the Tarot. This is Chesca Potter’s radical interpretation of this card. She calls it ‘The Guardian’. She says;
‘This extraordinary image shows the cave bear, skeletal, yet it has a life of it’s own, just as fearful memories can rise up without warning. Some flesh still clings to the bones, and fiery flashes of energy are unable to earth from the spine. Fears are literally ungrounded….For those whose boundaries have been confused and previously invaded, befriending and healing your guardian will heal your life’.
I’ve been pondering on protection. How do we psychically protect ourselves? There are light energy techniques, which I’m sure many of you know. But for me the monstrous image of ‘the Guardian’ gives another clue.
In the recording today I talk about this as a protection technique.