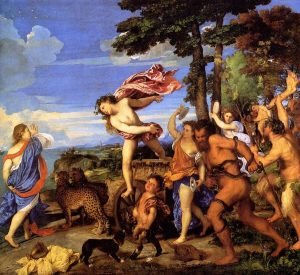 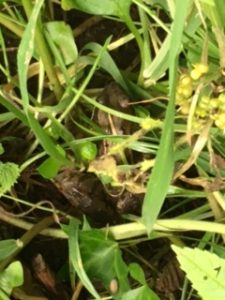 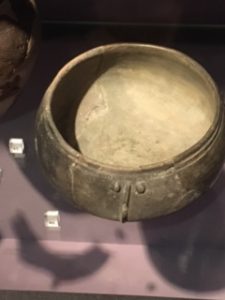 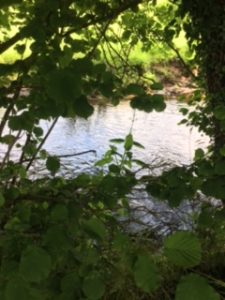 There was evidence of lots of different periods of architecture including a Saxon arch.
There were some dishcloths hanging out to dry in a yard that backed onto the graveyard. As I looked at them out of the corner of my eye, I was reminded of the ‘Washer at the Ford’ a Celtic fairy woman or Goddess. She sits at the ford, washing the clothes of those about to be killed in battle. There is a legend of a battle in Clayhidon; the last battle fought between the hill tribe people ( the Celts?) And the Saxon invaders. The tribes people were led by their king, Geraint, later to be Sir Geraint in King Arthurs court. Geraint and two of his men were the only local survivors of the battle. They fled to Exmoor according to legend. More on him later…
In the pub, we looked at the OS map together. Julian pointed out the lay of the land, how the valley that the Culm flows through is relatively narrow. He said it looked possible that the ancient glacial melt waters may have carved out a different pathway, maybe where the river Madford now flows, with Culm bridge going across it. This was the first indication that the bed of the Culm may have moved around over time – that the river we now call Culm, is in no way fixed, either historically or in it’s current state.
Once we got down to the river, dropping down in the valley from Clayhidon, the first thing I noticed was the sound. To my ear it was merry and tinkling as water splashed and danced over the stones. We stopped to look. Julian said this was a good sign; the river was shallow, there were stones with water weeds attached on the river bed, showing that the flow was relatively slow.
But a very short distance, walking along the river, this changed. The water became significantly wider and deeper, we noticed farm crops growing right up to the relatively high river bank. In a more natural state the river banks wouldn’t be so steep and the river would have the chance to flood onto surrounding land. But as this couldn’t happen here, all the water was pushed into the flow. It meant that the river was becoming bigger very quickly, carrying more water than it naturally should. There was still some waterweed, which was good, Julian told me, suggesting the water wasn’t going too fast. But still the river was carrying a lot of water.
We thought about a paddle, took off our shoes but the stones under our feet were very sharp. We’d noticed the Chert stone earlier on our walk – maybe these stones were used to make tools and weapons both by very early man but also later into the 17th century ( for scything). The stones lined the river bed. They were too sharp for paddling very far but as I looked at the water weed, it suddenly looked to me like the hair of a mermaid. Then I saw lots of them, mermaids with long green hair under the water. I wondered what they’d like to tell us about the river, what their stories might be.
As we continued to walk down the river, the green weed disappeared and the water was clearly flowing faster. Julian questioned me, ‘What is a river?’ Slightly self consciously, I tried to answer. I mumbled something about water flowing through a channel. Then he asked, so if water was flowing through a pipe, is that a river? No, I said. This led to a discussion about the water in the river and the river bed – that the river bed and the land all around the river could all be defined as river. It was interesting – a bit technical for me – but interesting and I had a feeling I understood

what he was describing. That it’s not just the water that is the river, that the land that holds the river is just as, if not more, important. It took me to a story.
It’s the story of the ‘Fisher King’ – there he is, St Andrew, the fisherman, again -and the Sacred Grail or Bowl. The Fisher King is terribly wounded, nothing will heal him and the land is a wasteland. The land can’t heal until the King heals. The only thing that sustains the King is a Sacred Bowl or Grail. The King has a son who fishes day and night, seeking nourishment and healing for his father. One day a knight comes, one of King Arthurs knights. He finally asks a question that brings about the healing of King and Land.
So the asking of questions. And what is the question? Who does the Grail/Bowl Serve?
On our walk we considered this question and the question, Who does the River Bed serve? Who does the River serve? Who do the questions serve?
It makes me wonder about the wisdom of these ancient tales. The asking of questions for healing – people and lands. And this particular question about the containment of liquid – who does this serve? And who could it serve?
I’m starting to feel thick with stories and information, maybe time for a swim in the river next week. Can anyone tell me good places to swim in the Culm? Can anyone share personal stories or anecdotes about the river? I feel a bit like the holder of the Holy Bowl in the Fisher King story. I’m wanting the bowl to serve everyone connected with the Culm. So if you have something to throw into the mix, please let me know, every ingredient adds a little to the flavour!
Now I’m imagining the lost city – alive and vibrant again, people gathering to share stories, songs, magic. There’s a fine meal heating in the earthen ware bowl hanging over the fire! You are invited.